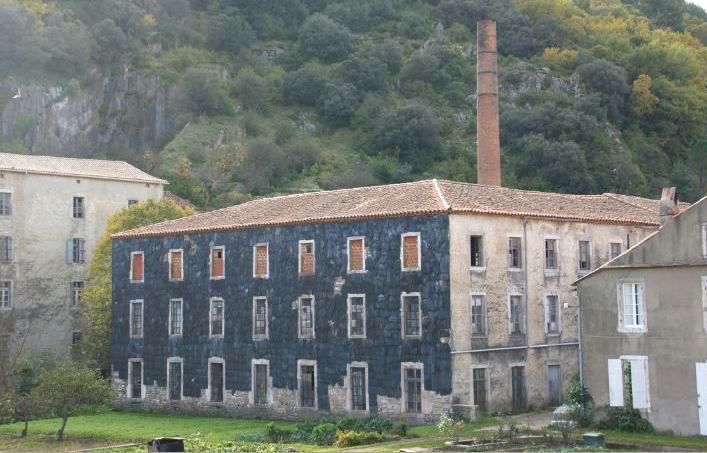 Notes ✧ returned to market probably because its hydro rights seem attractive but are actually only adequate during winter
✦ there is an old turbine, and this means the property could be self-sustaining to at least cover off season heating if rebuilt, a new turbine could generate revenue
✦ a historical survey reports that the windows are framed in marble, amongst other features, plus unusual slate cladding on the side facing the allotments
✦ regretabbly the survey reveals that at least part of the newer warehouses are covered with asbestos-cement roofing (perhaps all of their considerable 450m2), thus rather costly (~€25,000) to remove even though replacement would not be needed as they would be demolished to restore the original courtyard
✦ being the first candidate, the property was only scoped with a protype model, and is roughly the same cost as others; 20 units with a monthly share being ~€2800 for ensuite, €1600 for a pod; most rooms have two windows, could have up to 5 studios, plus much common space and a 160m2 events hall; capital ~€550,000
✦ 250m2 courtyard protected by the building and open to the south above the river; 300m2 of riverbank suitable for veg
✦ isolated but serviced village, just about acceptable for 1h20 daytrips to Carcassonne and the sea; nearest towns are pretty boring so this location has to really be considered self-contained and outdoor focussed
✦ the 76km Passa Païs greenway runs past the village and is an easy and very pleasant route for exploring and visiting a couple of pretty villages with cafes, plus one can go along the valley by bus
✦ exceptional spots for wildswimming and amazing hikes, plus kayaking 25mins drive
✦ the less than ideal winter climate would be offset by a south facing conservatory and big fires however #137 is better in this respect as a good town is closeby, whereas here one is effectively trapped in the hills
✦ given the climate would operate a 4-4-4 season with 40% extra time in winter and ~25% less in summer
✦ work is required to demolish the warehouses, and there's lots of badly made openings and random supports that would need to be tidied up; top floor is half missing both boards and some joists; there's lots of dubious block walls been added but easy to remove; otherwise mostly solid; all windows obviously need replacing; only a quick visit made, upper floors not inspected
✦ fibre not planned until ~2023 but 550m to VDSL2 exchange (~50/10) and good 4G for bonding; 16Mbps SDSL is also available but too expensive at €400/mo, 4–8Mbps at €130–200/mo might be worthwhile as a stable connection boost for video calls

Nobody's tagged this yet. All posts tagged #1 from any topic appear here.