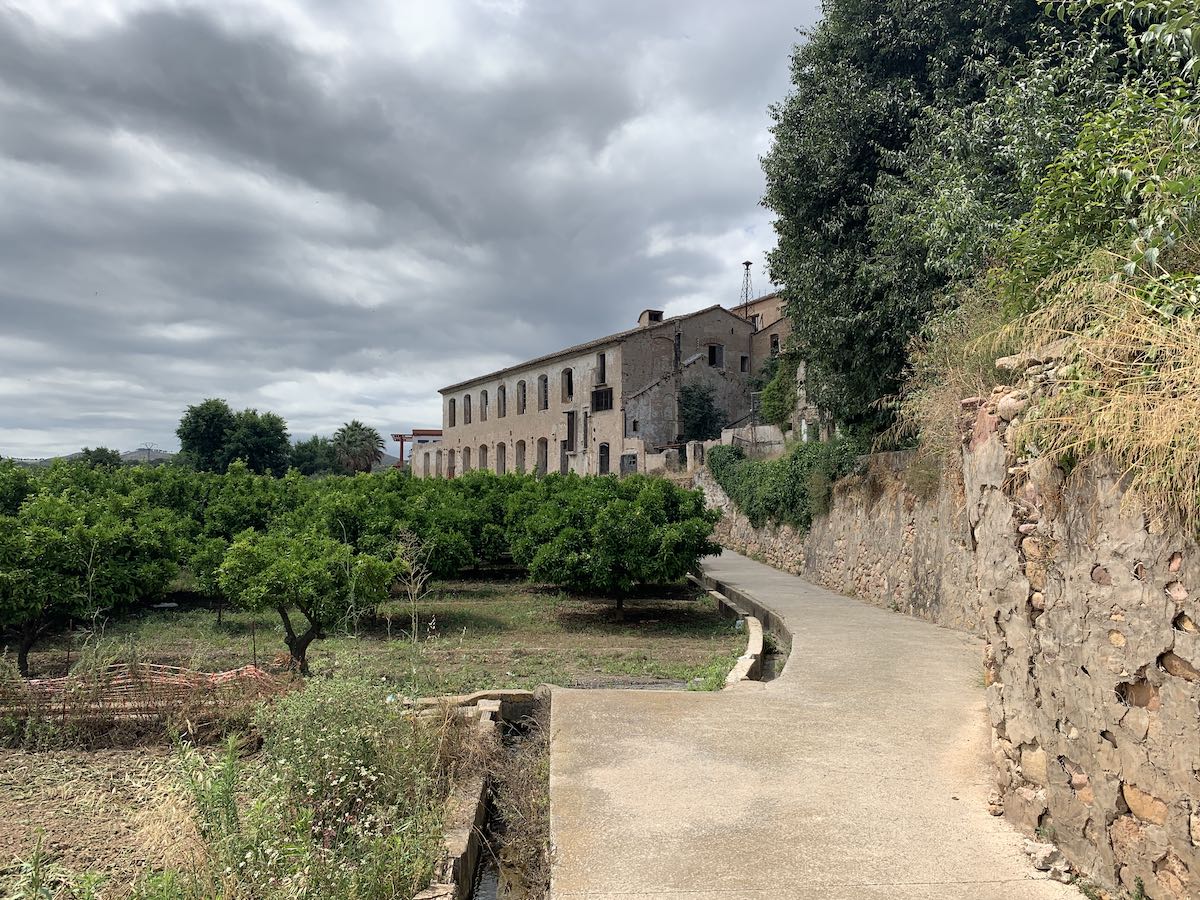 Notes ✧ actually not for sale so would require negotiations with owner which appears to be the neigbourghbourign town (not the village nor private)
✦ has a chimney!
✦ main building is 660m2 across two floors, and on a slope with the first floor being the entrance from the village, whilst the ground floor is a storey above lane and orchards at the front, the back still has windows but only onto a narrow (and cool) passage below the canal with a fig tree
✦ has 150m2 of isolated garden/terrace between the first and second buildings away from the school, this could feature a plunge pool fed by the canal
✦ accommodates 12 mezzanine rooms with over 300m2 of common spaces for a 1:1 ratio; 12m deep by 22m, plus a small extension (e.g. for dorm)
✦ there's a 65m2 ruined section which could be roofed with a first floor terrace with some glass sections to light the room below (probably living)
✦ strictly only this main building is required, however it is part of a plot which is a complex, and having an irrigation canal along its length; comprises a lovely brick entrance facade, at least 160m2 of ruins, plus a second tall industrial-style building of 175m2 footprint which could converted for large common spaces (workshops/fablab) and cohousing; surrounded by 1700m2 of land suitable for public gardens; however negotiations for the entireity would likely be complex and expensive
✦ if divided, the main building is next to the school with access from the village and to the lane below, the rest is independent
✦ minor south exposure at the end only, mainly facing east–west, with two floors to east and one to west
✦ during renovation of the casa palaciega next door, the village has actually used part of the plot to make a pathway between the palace and factory, the palace currently has no defined use, potentially a good event venue
✦ given the village's highway access and bus, it has potential for rurual coworking
✦ village has an urban art 'festival' (minor, but there's some murals dotted about)
✦ the canal has a great flow and is already used by the village for some hydro generation, strictly it runs through the plot, thus may be possible to install a small generator as it wouldn't change the course or consumption sandy beaches are lightly are in builtup areas, but there's also more barren pebble beaches waterfall and swimming 30mins bike; thermal pools (winter swimming!) 45mins drive
✦ sports ground (tennis and swimming pool) close
✦ near the bottom of the 218km vía verde de Ojos Negros
✦ towns seem to be unremarkable, thus only notable destination is really Valencia with direct trains plus a reasonably late bus back at 8:40pm
✦ the immediate countryside provides good walking/splashing/biking/castles/ruins, there's also a small via ferrata a short walk away; plus the coast is close; a bit further away are some impressive canyons and swimming spots, plus rafting and other adventure sports cadastral data; #35 Fábrica de telas de Pepito Domenech in mills of the Alto Palancia
✦ has protected elements
✦ fibre available from adamo.es; WIMAX may also be available (prored.es), and mains gas is available
•• Show property notes ••

Nobody's tagged this yet. All posts tagged #121 from any topic appear here.