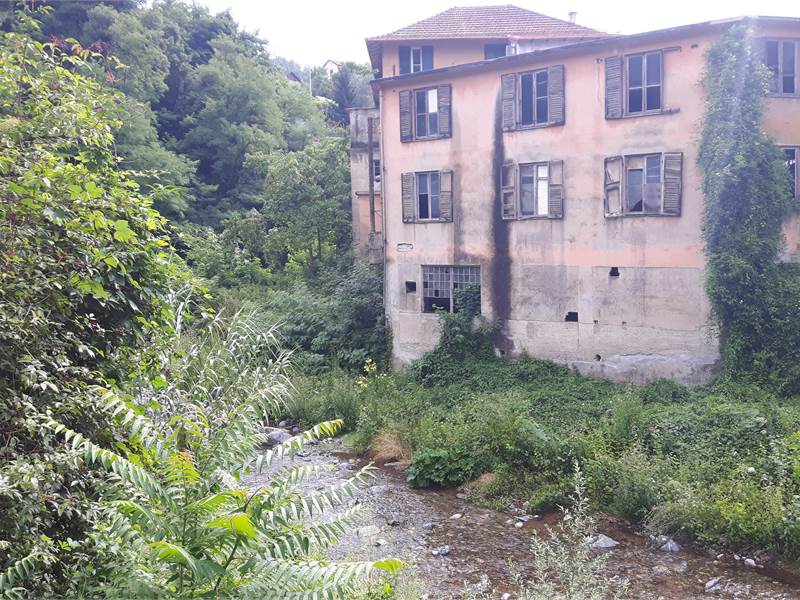 Property ✧ an ancient flour mill, partly extended with concrete and beam-block storeys, having 5 floors, with an existing but unfitted apartment and a 200m2 roof terrace
✦ could provide at least 10 ensuite bedrooms looking over the stream plus 2 studios with independent access
✦ may be possible to acquire land for a garden/veg, maybe even directly across the bridge
✦ quiet road and almost no traffic noise as the building setting is behind others and low down next to the stream thus sheltered
✦ has a gas connection, and public sewer (conduit in the river) so usable on all floors
✦ beams and joists are fine and strongly reenforced for the heavy machinery, new flooring is required although the ground floor's boards could be kept, and others patched up, a significant amount is concrete
✦ lower floors are full of ancient milling machinery which would need diassembly to remove
✦ the sub-basement (next to stream) requires substantial work due to mill structures/canals and flood risks, would thus be last to do; being part double-height could extend the basement which is well above the flood risk level, strictly needs entryways to be closed to height to prevent ingress, thus somewhat limiting external access
✦ all windows (min 38) need replacing although the single glazing in the apartment would suffice for a bit, some require wall work due to crumbling surrounds
✦ the terrace/roof is solid but needs resealing and/or tiling; the appartment roof needs minor repairs; a very small (8m2) independent section of roof has collapsed over a staircase extension at the back, the stairs are however sound
✦ the facades will involve expansive work but for appearances only so could be deferred and done gradually, however on the stream side would require five storeys of scaffolding(!)
✦ one section of concrete floor (lower-ground extension) has shifted fractionally probably a result of floods, so needs the foundations of its columns checking, and the walls above
✦ stream water seems clean so might be suitable for swimming, the sub-basement however has a very deep but no longer connected canal jammed between the rock of the hill and the building which could be possible to create a filtered splash pool with terrace getting some sun in summer
✦ the yard in front is likely to be divided with rights for the house that is parcel 3; may include parcel 9 which is at least 600m2 of the stream bed and banks around the building
✦ CATASTALE: CERANESI (GE) C481, FOGLIO: 18, PARTICELLA: 1

Notes ✧ visited 10th Aug Genoa is impressive and interesting but its suburbs and immediately around the property are rather ugly and uninteresting, the property setting itself is however nice isolated right on a deep bend in the stream between two bridges; there's decent local facilities (shops and restaurants) but for anything trendy or in a more appealing setting one has to go into the city; the building has great potential as part could be usable quickly, yet would require increasingly more work to make each additional floor below functional
✦ the east-west valley results in the property getting morning and evening sun, but may not get midday winter sun, it also means it's somewhat isolated from its few immediate neighbours, mostly facing the stream
✦ there's a bar and tiny corner shop next door, streetview
✦ the neighbourhood is a somewhat uninpsiring mix of boring houses, warehouses with housing blocks a bit further down, yet the property is on the very edge with only a few hundred metres before being more rural, also close and easy to get out to the nicer sights of the Ligurian riviera!
✦ the Italian coast here is somewhat northerly next to mountains, so cooler and a bit more overcast/rainy than one might expect, with the mountain getting brief snow; survivable with climate change as summers are not unduly hot; likely a fair balance
✦ suitable for public coworking from some of the suburbs by car (not the city, where there's lots of coworking)
✦ the city is over 1h by transit yet the local station is only 10mins drive or 15mins bike then a 25mins train, but driving into the city at just 30mins is best; busses have no useful timing for onward connections, the stop is Pontasso, another line is 5mins walk away, and more terminate at Ponte Ferriera 10 mins walk
✦ by train Genoa can be reached overnight via Paris (Thello), Munich, Vienna (Nightjet); or the same day via London, Paris, Munich, Zurich
✦ airport is well served year-round (daily to London, Paris, Amsterdam, Munich, Palermo, Bari; regularly to Frankfurt, Tirana; seasonal to Barcelona, Madrid, Copenhagen, Moscow, Palma, Vienna, …); Milan and Nice are also reasonable
✦ the region seems quite progressive and has a geoportal using OSM
•• Show property notes ••

Nobody's tagged this yet. All posts tagged #125 from any topic appear here.