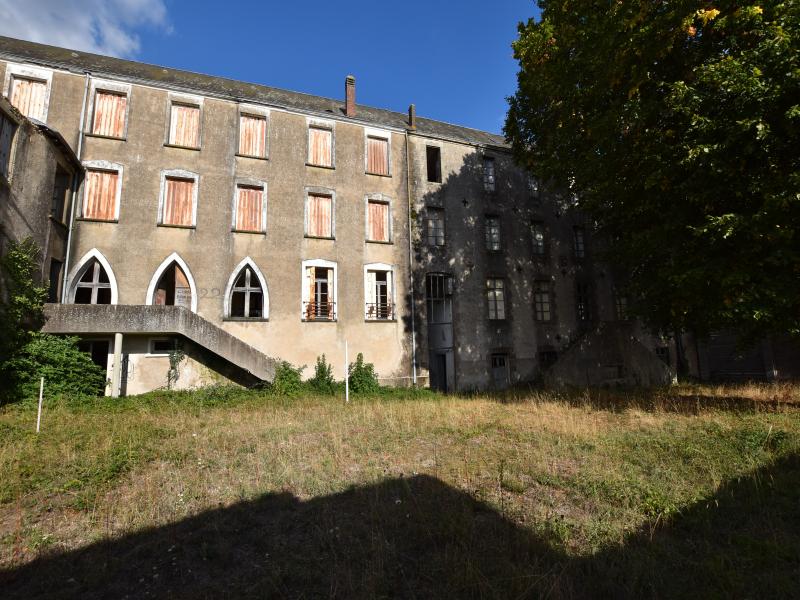 Notes ✧ undesireable climate (barely better than England) and unremarkable countryside, however great as a base / cohousing, and with a strong community could also function well as a hub with potential for using some space as non-digital workshops; plausibly cheaper than other properties for better rooms
✦ possibly just about large enough to be inward focussed; given there's four or five towns within easy reach it could reasonably host outreach events and programmes; two of the towns are moderately interesting for outings
✦ hypothetically 6 studios (~30m2); 14+ rooms; lots of pods; good common spaces
✦ a fairly imposing building given its height and position on a hill overlooked just below the abbey and the town's garden, if not notable as such; quiet with no neighbours
✦ its garden is a high terrace looking across the valley
✦ south-western exposure, garden and some rooms also have east
✦ quite a few easy local walks/bikes on doorstep; and a greenway to two towns; some possible barrages for SUP; horse riding; otehrwise activities are limited; 20mins away is a naturally-filtered summer swimming centre, 25mins to some easy kayaking
✦ pretty rural very small and quiet town though has public gardens (3 in stone's throw), annual events (a medieval festival), an abbey, tennis courts, indoor sports hall, and social center; a hub could thus maybe dynamise; only 2 resturants so inward focus would remain important
✦ building appears structurally sound, although at the very least some minor parts of the roof look like they need work; all windows and doors need replacing although some might be temporaily reglazed and many still have shutters, significant interior works (complete stripping and new infra); floors unknown but appear ok
✦ 700m2 garden with some big trees, 100m2 courtyard, 65m2 yard, 150m2 alley
✦ 900m2 main building on 3 floors, plus ~200m2 basement; only 6m deep but 44m in length, coomon rooms would thus generally have no passage with windows to both sides
✦ 180m2 wing on 3 floors
✦ 240m2 annex plus basement, 100m2 adjunct house on 2 floors
✦ the garden is good for both a conservatory and a firepit
✦ 5-month winter season Nov–Mar; 3-month shoulder (Apr, May, Oct), 4-month summer (Jun–Sep)
✦ seems like the wing might be partly functional and thus not too hard to prepare for initial volunteer use
✦ operationally taxes will be high, and heating significant but is classified as ✅ZRR for tax reductions
✦ a prior apart-hotel project was planned but obviously failed, likely due to the cost of using French suppliers and complexity of subsidies, not to mention slightly odd location for such large capacity; coliving is probably better suited as it preserves an integral layout; worth noting that the building is in a safeguarded zone and therefore window replacements would need to meet specs, however acceptence of aluminium windows is implied
•• Show property notes ••

Nobody's tagged this yet. All posts tagged #139 from any topic appear here.