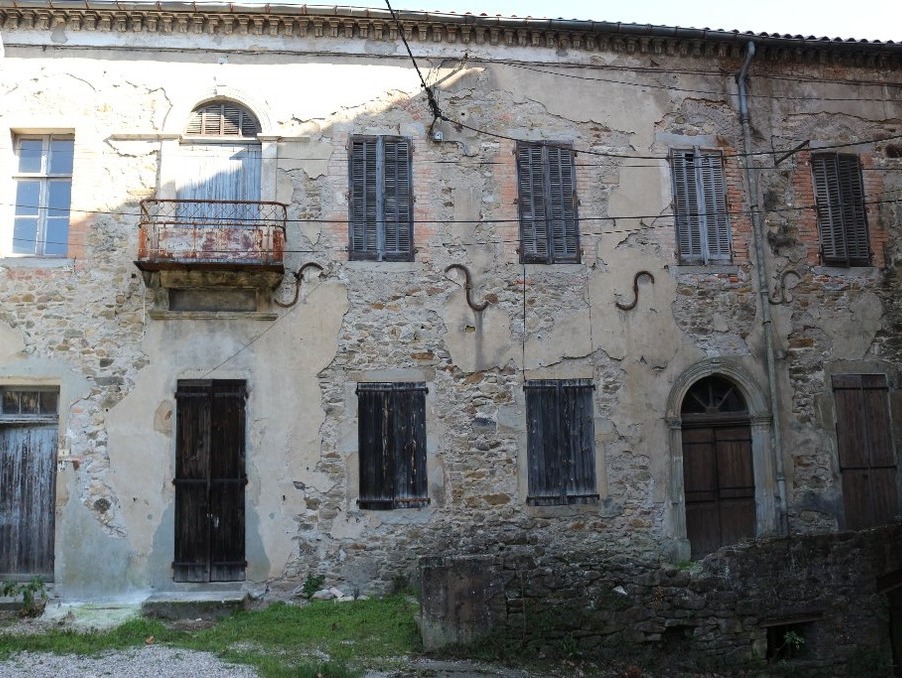 Notes ✧ the first agency never got their agent to call back, but the second who no longer had it on contract tracked down the owner so both had invalid listings🙄
✦ looks a bit dilapidated doesn't it! is the end section of a old building with a staircase tower, in a hamlet next to a small river, close to quiet villages and a good little town
✦ 2000m2 of land a few metres away in two sections, one immediately across the lane next to the river, the other around the end of the houses below the road; however the land directly in front (2500m2) next to the river with a couple of trees is a public space (hosted a village meal), which could in collaboration with the village be beautified with some fruit trees and wild flower beds, making eating directly outside nicer than going across to its garden proper
✦ winter climate is pretty good with an entire third of days clear and just a few of snow, though gets bursts of very heavy rain in spring and autumn
✦ tennis court next door; river spots all around; kayaking 30mins bike; decent hikes and biking from the door climbing to 500m; a short drive gives more variety such as these lovely eroded pools 25mins drive (1h bike) good gorges with sup/kayak/climbing, and heights around 900m at a pretty village are 30mins drive; more landscapes including the pont d'arc and the lovely town of Uzès are 45mins+
✦ two restaurants a short stroll, one an auberge supporting local producers, and another a casual roadside dive with burgers and boardgames; plenty of others around and in bikable distance
✦ the local little town of St Ambroix is pretty with a good market and some cafes etc, the main town of Alès used to be rather ugly yet is undergoing rehabilitation notably with its horrible market hall and square planned for rebuilding, it's moderately lively and has tons of shops and restos, even an icerink; whilst the lovely city of Nimes is about 1h15 from the door
✦ coast is 1h30, as are Avignon and Arles so just about plausible for an occasional big day out
✦ building is primarily east facing albeit without any view beyond the river and treeline, whilst the west is obscured by neighbours behind with a slight rise; it has no direct southern exposure which would be good in the summer, though a hill blocks the sun from late afternoon in winter
✦ high cielings permit ensuite mezzanine rooms on the top floor (beams permitting), and has unusually tall windows almost to floor level
✦ roof redone recently; exterior is obviously in poor state and needs rendering/pointing though could be deferred; seems mostly solid and whilst some windows are functional it is quite not usable as-is; lots of ceiling/wall demolition to make the mezzanines; otherwise plumbing and electrics not unduly difficult however it may be necessary to rerender inteior walls as well
✦ costs are quick estimates, and because of the small number of units we really see loss of cost effiency from scale, however the smaller scale and existing function as a house means risk is significantly reduced almost to the point that it would be just about hospitable with the electricity turned on and some temporary windows, thus easily phased
✦ 8 pods (€1800/share/mo) in a large room with windows on both sides plus 3 shared bathrooms)
✦ 8 mezzanine ensuites split between standard (€2700/share/mo) with east window (onto river) having king-double mezzanines, and plus (€3500/share/mo) with west window (no view) having generous single mezzanines
✦ the mezzanine rooms are very small! 2.5 x 3.8m or about 9m2 but entirely functional with shelf-desk and stool in front of window, hanging space and shelves, and even space to store bags, if not much else
✦ two main common areas, being a quiet top floor library/lounge with some desks, getting both evening and morning sun, and the caves gettign morning sun onto the square as the casual area with workspace and lounge; uses could be swapped
✦ the kitchen-dining (and pods at back) are on the ground floor with access to the square either out the door and around on the lane under the arch, or down the stairs, which is not unreasonbly impractical for eating out
✦ a conservatory would be overkill for a satellite property though if desired would have to be on the higher land, however it should be possible to build at least a lean-to and pergola at the garden for a little private area
✦ if the tower stairs do not reach the cave, the outdoor stairs could be covered, and even walled
✦ heavy short rains are common (known as an 'épisode cévenol') with risk assesments for the open area being high along with the lower garden, whilst the caves are moderate risk and thus could not be used as kitchen/dining but would be okay as the quiet workspace and a lounge; see photo for typical flood level
✦ there's a moderately useful morning and midday bus to town in 30mins fibre deployment is scheduled for 2022 and already runs along the valley for upgraded exchanges, the nearest being ~1.2km thus adequate with VDSL2; there's one LoS mast (Orange) just 350m away, whilst all other providers are on a mast 7km away with poor coverage, both requiring a roof antenna
✦ there will be a local station 20mins bike away, helpful for exploring, though the line is currently closed and scheduled to reopen around 2026 parcels 1493 and probably 1492, plus 1490, 1496, 1497 for the garden(s)
✦ whilst access involves changes and a short pickup, there's good choice; Nimes airport is a train then shuttle and normally has year round service to Stansted and Brussels, plus seasonal to Luton and Morocco; many more options including Lisbon from both Marseille and Montpellier
✦ (the hamlet is variously spelled Pomier, Pommier and even Pommiers)
•• Show property notes ••

Nobody's tagged this yet. All posts tagged #161 from any topic appear here.