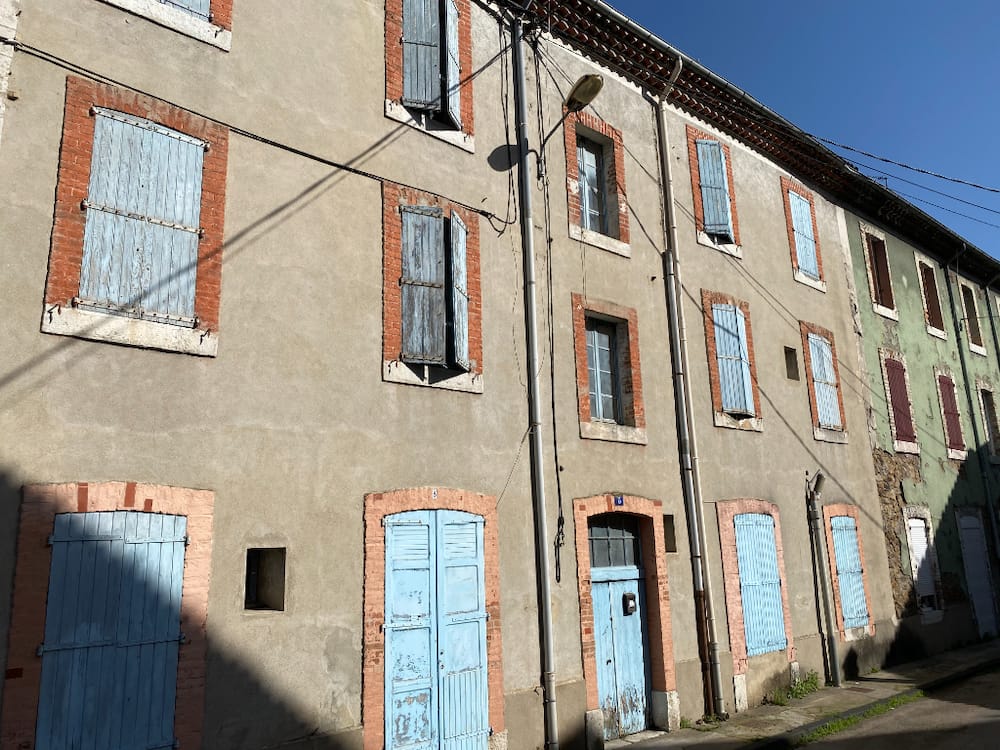 Notes ✧ larger than #166 but trades the outside terrace for a better local town, and indeed a more engaged village
✦ row house fronting on both sides to squares, south amongst the village (photo, building left-centre with light blue shutters), and north to the open market place (photo, building with light green shutters) which is really just parking with some trees though presents a good opportunity for collective gardening to make up for a lack of outside space with the property
✦ ideally the south-facing side of the top floor would be opened up with floor-to-ceiling french windows, and 20m2 of roof terrace-cum-balcony shaded in summer but catching winter sun, otherwise a concertina window could be used for a flush juliet balcony as a solarium giving a partial sense of being outdoors, especially if on both sides
✦ there's a bar/cafe next door with tables opposite in the square which livens the place up
✦ the little local town of St Ambroix is pretty with a good market and some cafes etc, the main town of Alès used to be rather ugly yet is undergoing rehabilitation notably with its horrible market hall and square planned for rebuilding an reopening in 2023, it's moderately lively and has tons of shops and restos, even an icerink
✦ the river at the door isn't good for swimming though fine nearby for a splash, better and kayaking 25mins bike
✦ good hikes and biking from the door to a ruined fort very close (being rebuilt by an association), or climbing to 600m (400m ascent); a short drive gives more variety such as these lovely eroded pools 30mins drive (1h15 bike) good gorges with sup/kayak/climbing, and heights around 900m at a pretty village, plus the pont d'arc are 30mins drive
✦ coast is 1h30 so just about plausible for an occasional big day out
✦ winter climate is pretty good with an entire third of days clear and just a few of snow, though gets bursts of very heavy rain in spring and autumn fibre deployment is in progress; ADSL is 2km away thus not great; two providers (SFR, Bouygues) have a mobile mast in the village itself, the others have poor coverage from 4–5km
✦ for the local little town there's a path over the hill (1h15 walk), and a footbridge over the river to the road for the bus or cycling (20mins); a moderately useful morning and midday bus to both towns (5mins St Ambroix, 40mins Ales; 8am return midday, 1pm return 5/6/7pm)
✦ whilst access in the short term involves changes and a short pickup, around 2026 the railway line will be reopened bringing the main town to 30mins 4 times daily
✦ onward connections have good choice; Nimes airport is a train then shuttle and normally has year round service to Stansted and Brussels, plus seasonal to Luton and Morocco; many more options including Lisbon from both Marseille and Montpellier
✦ on the south square there's also two unused ground floors one of which used to be a cafe, and would make a good public coworking, freeing up space in the coliving building for a better kitchen; there's also has workshop capacity in a factory building, and some small businesses based there including a carbon fibre bike repair and composites outfit
✦ 3 floors of 135m2; there's also a cellar of unknown size, potentially another full floor which would bring it up to a very good size
✦ would accommodate at least 5 bedrooms with shared bath, 4 ensuite mezzanines, 4 pods
✦ building is in fairly good condition though the exterior needs to be redone to uplift the surroundings; currently divided into 6 apartments with basic plumbing and electrics
✦ the top floor has an attic thus could accommodate mezzanine rooms
✦ slabs are jack arch with steel beams (catalan vaulting)
✦ parcel 82
•• Show property notes ••

Nobody's tagged this yet. All posts tagged #171 from any topic appear here.