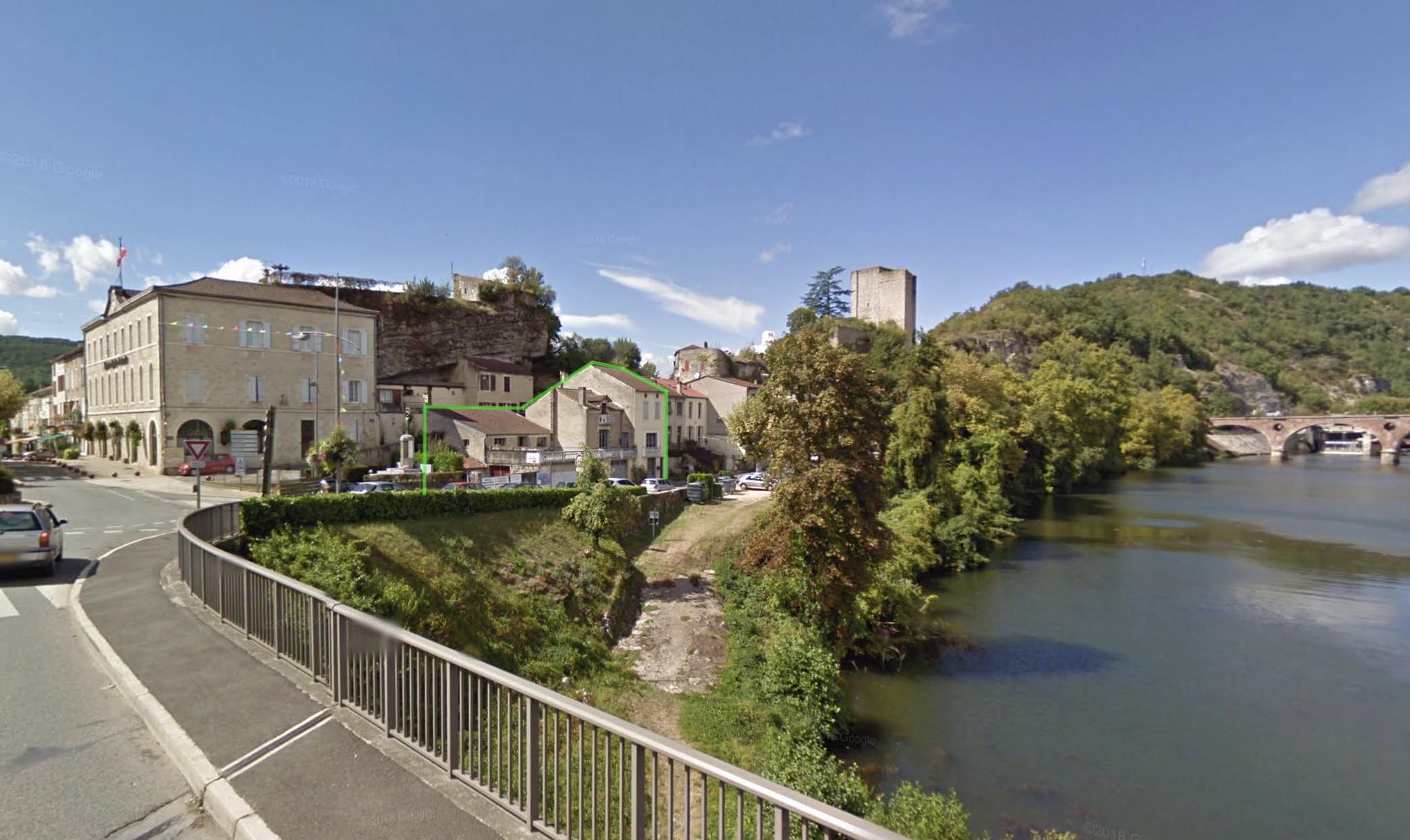 Notes ✧ price dropped over 50% from last listing (was 65k)
✦ on an oxbow in the river, with a fort perched on a small cliff, and an old railway bridge, if slightly spoiled by the road bridge going through the middle, but only a local road
✦ not a remarkable environment yet suitably laid back with one good local town (having an impressive fortified bridge), bus service and adequate countryside for workations, though challenges and more notable features are misssing
✦ sleepy village with small weekly market and a coworking (€7/day) in an old school (albeit very office-like) down the road thus it's unlikely any public access would be offered to this property, however could still host small events
✦ the west is completely obscured by a cliff thus no sun past midday, however a somewhat extreme option would be to make a flat roof terrace on the middle building thus catching sun until later; there's also riverbank on the west side of the village for catching evening sun
✦ two quick strolls with views over river, one with good 150m climb in 30mins
✦ voievert in progress to Cahors mostly along old railway taking 1h by bike
✦ tennis 10mins walk; riverbeach/easy kayak/sup 25mins walk, others near
✦ 50mins drive to St Circ and the Lot river cliff towpath as a daytrip
✦ direct intercity train from Paris last arriving 11pm
✦ 2 simple restos at door, one fancy 5mins drive✦ probably 10 rooms with extension, else 7, plus pods
✦ could be 420m2 with extension
✦ partly usable
✦ the plot is 300m2 though is steep at the back where a lane climbs above, and abuts a memorial behind a hedge next to the roundabout at the south
✦ north main building: 3 floors of 45m2, small attic with 1 gable 4.5m x 10.5m suitable for 3 mezzanines; 1st floor pods
✦ mid building: 35m2+ ground floor, 2x 30m2 floors one attic with gable (2 bedrooms), 4.5m x 7m; 15m2
✦ these first two buildings have 25m2 of raised/1st floor terrace at rear, which could be extended over to terrace at front using a flat roof in-between on the next…
✦ south building: 65m2 ground for kitchen/dining, large door onto street no other lighting however could have a glass panel, 50m2 1st floor with tall roof onto back lane; 8m x 5.5m 1m hall then 3 mezzanines with skylights or lane windows/doors
✦ 40m2 east and south facing terrace overlooking river, there's public land on opposite side of lane next to the bridge that could be guerrilla gardening
✦ could build over the terrace raising it up a level to be an entirely flat roof of 90m2 covering the south building and the existing terrace, then living room would be above street gaining a raised south window
✦ new extension 40m2 ground: 10.5m x 3–5m, living room, would have a long low south window at ceiling level for more light; first floor would be 3 rooms, but raised above terrace slightly for the window below (which needs to be above hedge too), this would also provide protection from the road (only local serving a couple of villages); otherwise 40m2 courtyard and shed
✦ none of the works would be tricky as the building has all around access, and it would be partly usable with nominal effort, however a fair bit of investment and time would be required✦ adjacent 250m2 building seems to be abandoned, plus others down the lane notably 206 but at 85k and only 240m2
•• Show property notes ••

Nobody's tagged this yet. All posts tagged #204 from any topic appear here.