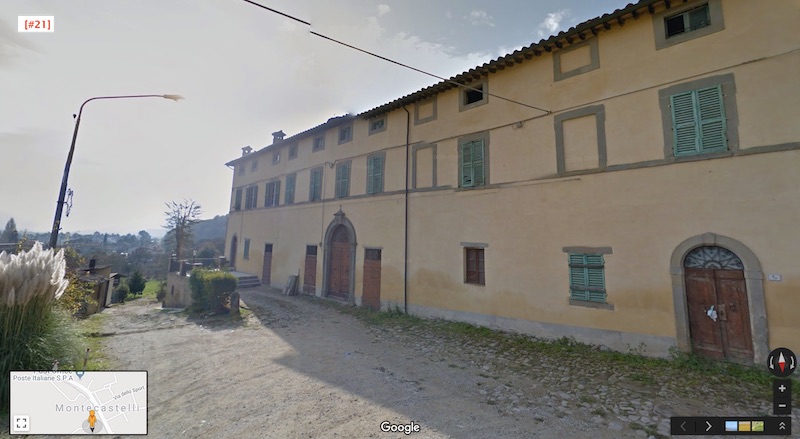 Notes ✧ streetview
✦ ugly little hamlet but nice surroundings and towns; there's a river through the hamlet but not swimmable; 35mins to the natrual lake Trasimeno, which has some decent beaches and pretty towns, and another lake with windsurfing; coast is 1h30 so maybe very occasional daytrips; mountains 45mins
✦ canoeing in town, horse riding in hills 35mins drive
✦ 1600s building, could be converted in phases with minimal inconvenience as roof looks fine and may already have some semi-functional parts
✦ the property comprises multiple fields of 23ha and two buildings, proposed for sale as follows:
✦ 1. advert #1 135k — the main building (700m2 plus attics), a connected but roofless cottage next to the lane, with field across the lane (#93 3500m2), and veg plot (#551 1200m2) to the east in front of the railway
✦ 2. advert #2 48k — a small barn (125m2) behind to the west of the main building with some wooded hillside (#1103, 3200m2); this seems to have since fallen into ruin so not clear why it's expensive relative to the first ad
✦ 3. the field to the south (#132 8200m2) is not included but could be acquired, with a two-storey 65m2 building and has seperate road access
✦ the building is about 10m deep and 30m long (11 windows front, 6 back), with a small extension and the ruined cottage
✦ the attic can probably provide up to 14 basic bedrooms (2.8m x 4m), maybe some ensuite; on the first floor there'd be a dorm and a couple of ensuites
✦ this leaves at least 500m2 of common spaces however the ground floor lacks much in the way of windows, thus would need work to be opened up with new lintels
✦ likely very good share cost under €2k/mo
✦ winter months are unappealing and fairly overcast but rainfall is low under 50mm, and whilst the climate appears to drop a bit low, shoulder season highs are over 20°
✦ whilst the road is 50m away over the railway, neither are too busy (there's a highway on the other side of the valley)
✦ just below the medieval hamlet of Montemigiano
✦ 40/10 wimax €150 http://www.retewifi.it/ add 6mbps up for €40; 4G or dedicated from linkem.com; apparently no VDSL, fibre is available in two directions both 3.7km away, so likely be extended soon, otherwise a wireless relay could be used
✦ airport serves London, plus Palermo, Malta, and Tirana year round which are interesting nomad destinations, seasonally adds Cherleroi and Rotterdam, thus other conections will be via train from Rome or Milan
✦ Perugia is not the main town, as is 45mins drive or 1h30 transit with a bus connection from the mainline station outside town
•• Show property notes ••

All posts tagged #21 from any topic appear here.