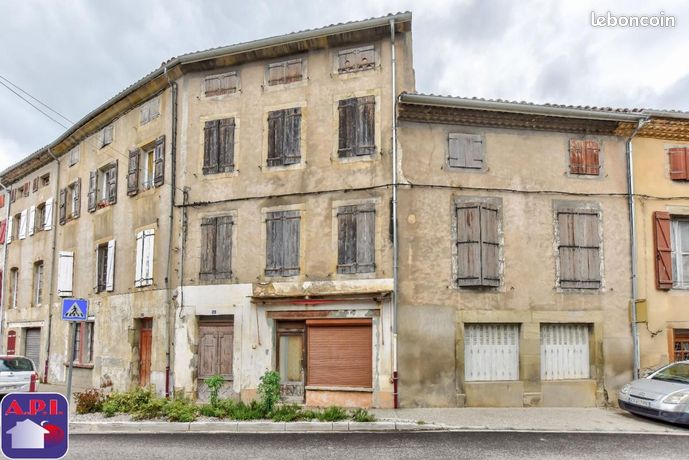 Environment ✧ rolling hills, partly agricultural at base of mountains; paths on doorstep

Notes ✧ this location is very quiet and rural with pretty villages and a few cafés/restos, with the lovely little town of Mirepoix 25mins drive, and Limoux or Foix at 40mins, but zero access to cosmopolitan life thus would need to be generated from within
✦ the airport at Carcassonne is 1h drive, but the train to Limoux (30mins +40mins drive) or from 2025 Quillan (1h20 bus +30mins drive currently) makes it adequately accessible for pickups, or Foix (1h15 train +40mins drive), else there's then busses reaching within 10mins drive✦ at the base of the pyrenees, not far from several cathar castles; lots of good hiking, lake 15mins bike (with good cafes/hangouts), sailing/kayak/sup 15mins drive, horse riding, paragliding launch site; lakes are good for swimming and likely river spots; SUP would be possible with own boards
✦ village has a minimarket, and what appears to a pretty cool little cafe–pub; plus a tennis court, a large green and a hall
✦ an old railway greenway of 38km passes connecting with the two towns (30–45mins or 1h bike) and nearby villages with a brewery (15mins) for easy exploring by bike
✦ the village has a large garden/green, tennis court, and events space
✦ nearest skiing 45mins drive
✦ fair winters, low mean at 10° but hot days of 18° with 8 days sun
✦ there's a yoga retreat a short walk away
✦ village/bus 20mins bike on greenway or town/bus 45mins by bike on greenway✦ 130m2 courtyard and 290m2 garden
✦ three buildings (same plot) first 3 floors of 85m2 plus attic (3 windows; 6m across), adjacent 2 floors of 70m2 plus attic (2 windows; 5m across; has unused beams at mid height in attic but could probably be removed)
✦ both back onto a 100m2 courtyard (mostly shaded) with a 3rd building behind having 3-floors of 65m2 (5.5m across)), there's also some side annexes (3 floors and attic of 25m2 with morning sun and new roof, the other only 1.8m deep but suitable as a focus workspace)
✦ 190m2 garden, there's seemingly a landlocked 500m2 abandoned plot for potential acquisition
✦ the adjacent property with 150m2 footprint and 250m2 garden is completely collapsed in sat view (hole 1019, all roofs gone 2021) which seems like abandoned prep to rebuild so could also be acquired
✦ despite the significant scope of work it could be partly usable with main building roofs okay and some rooms in acceptable condition; some haphazard works were started (although blocked up windows would need reopening with lintels) but the third building behind needs a new roof as part has collapsed and part of the floors may also need replacing but these are all small buildings with small spans✦ due to narrow buildings the layout would be a bit awkward requiring creativity however the end result would have a lot of character
✦ the courtyard would have a large orangery/greenhouse acting as a dining area
✦ without garden access from the road, foot traffic and bikes would have to travel through one of the common spaces, then down steps, however rear access might be negotiated along the edge of a field
•• Show property notes ••

Nobody's tagged this yet. All posts tagged #218 from any topic appear here.