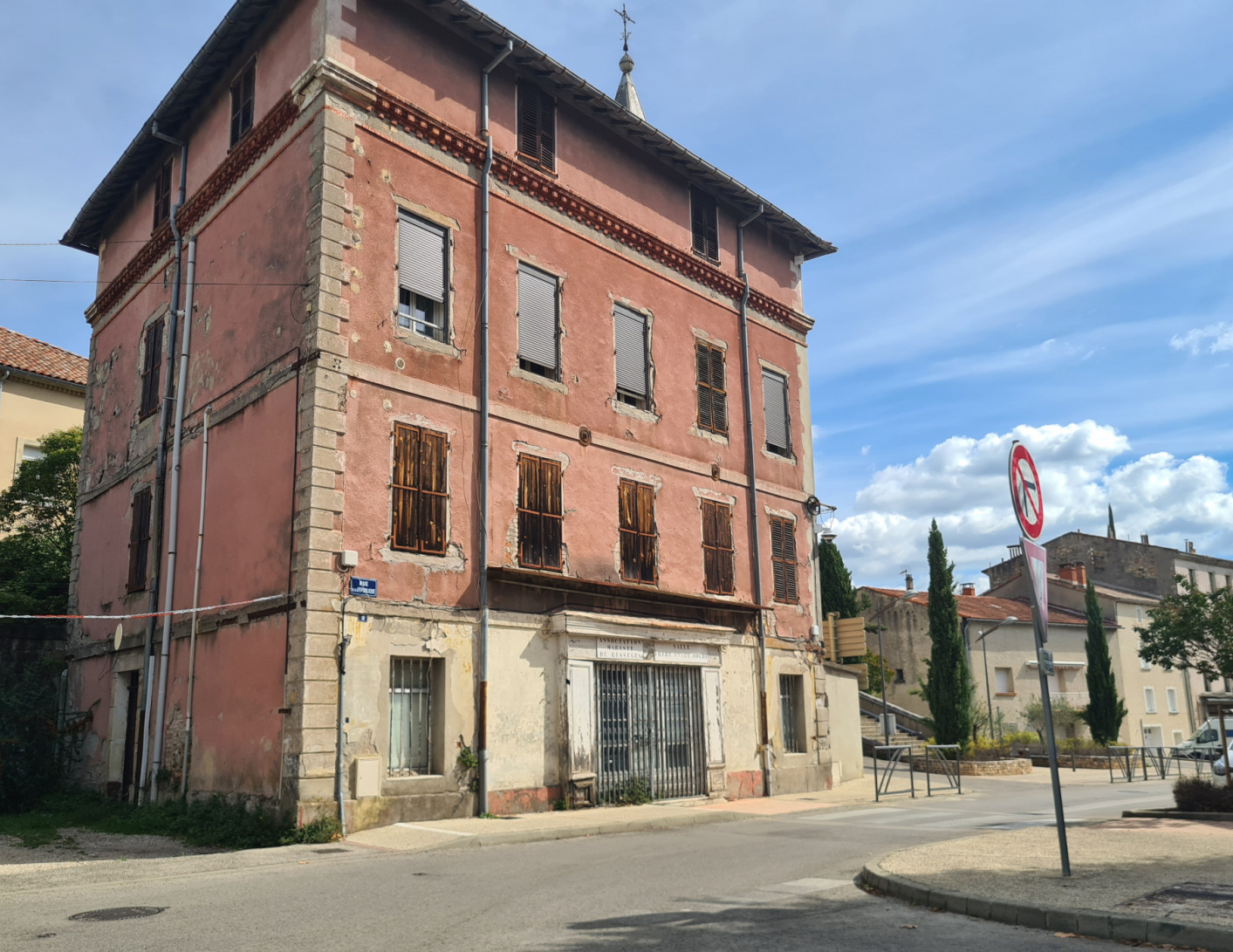 Notes ✧ visited 25/10/22 (brief thus couldn't properly inspect and take measurements)
✦ freestanding recognisably pink building at end of village across from church
✦ partly usable immediately with 2 floors in acceptable condition, one having newish double glazed PVC windows and doors
✦ does require immediate remedial works for roof which has 2 small leaks, needing relaying of some tiles probably with some new battens; a scissor/articulated lift may be plausible (€250–400/day) to simply lay some leading which could easily last a decade or two; however 2 sections of scaffold would be preferable with a motorised lift to do properly
✦ the rest of the roof would probably last a few more decades with minor work but would require a very significant amount of scaffolding given the four sides and height, same for the facades though these could be done with less robust tooling and in sections
✦ also requires removal of quite a lot of lead paint, however doors and windows would simply be removed, and walls could be boarded or painted over (with suitable instructions not to undertake drilling without stuitable evacuation)✦ 4 floors of ~110m2 (no attic)
✦ ground backs into hillside (only blocked on back side, open at front) and nice nice brick vaulting at 2.6m thus great event space and cinemaall floors are split in half by a retaining wall
✦ 200m2 of garden a bit above first floor, second has steps down; the next building at end of garden has no windows at the garden level
✦ 60m2 space adjacent with a two-storey stone retaining wall giving access to the front door with steps up to the garden — this is however not part of the property, only having access rights, it is probably village property as is actually an old mine with a large arched entrance that's been covered in rather nice streetart; could probably at least lay paving or gravel and guerilla garden
✦ 12m2 shed could offer a street side 1st floor balcony/access steps
✦ easily 6 small units on 3rd floor plus pods on second (tall cieling) and maybe an additional room or two somewhere else, also potential to build a wing fronting the church✦ BUT directly opposite a turning where most through traffic leaves the village due to an unfortunate one way system, however the rear garden would be sufficiently isolated and traffic is only notable at peak times✦ tennis 10mins walk
✦ several hiking circuits are possible on the hills either side of the river starting 15mins along lanesand climbing 450m; most trails are fire tracks and singletrack is less common; the GR44B passes the door and leads to an impressive chateau in 1h biking; the nearest moderate peak (1300m) is 30mins drive, however can reach a 1000m summit in 2h30 biking entirely offroad climbining gradually with downhill all the way back ;) similarly there's a 2h route to the small town with return by train or along the road
✦ there's a quick bus/10min drive/30min bike to a much nicer village with several weekly markets (including organic), good cafes/retos, plus riding and easy kayak; and another village at 25mins thus 3 villages for nearby outings
✦ whilst the river through the village is ugly, river and swimming spots are closeby both up and down river; a stunning spot 30mins drive for hiking and splashing
✦ the Ardeche river with gorges and other other locations down the Ceze are also 30mins, notably Les Vans, with good gorges and more kayakinging/riding, to 45mins (for the famous Pont d'Arc); there's better mountain landscapes and two very nice small towns (Uzès, Andouze) at 1h for occasional daytrips✦ the main town (Alès) is not bad thanks to ongoing improvements including a new market hall pending, and will be 40mins by train in future (reopening 2026, 5-times daily 1€; same as driving versus 1h bus currently, last being 6pm; will reopen 2026)
✦ the lovely city of Nimes will be 1h20 from the door (if there's direct train) which makes it plausible for a daytrip (and often also just 1€)
✦ access is good; Nimes airport is train then shuttle bus with year round service to Stansted, Brussels, plus seasonal to Luton, Dublin and Morocco; many more options including Lisbon from Montpellier and Marseille✦ village is large with active wood industry, nd promotes streetart
✦ there's a pile of old factory buildings, one now housing a bric-a-brac community repurposing space, and a micro-brewery(!)✦ the housing co-op just a bit above with a huge building (red facades!) seems to have changed direction, it was/is offering cohousing units (12 unit shells of 50m2 for €48k), and is apparently now focussing on being an eco-friendly third-space/tiers-lieu, incubator, communal garden, etc; thus maybe suitable for joint operation of a larger coworking, however revenue potential probably wouldn't adequately support it thus debateable versus a more purposeful but smaller remote-work focussed space the we own and underwrite oourselves; the founders of that seem more intentional than HH would likely be directly compatible with, yet would by very complimentary being next door
•• Show property notes ••

Nobody's tagged this yet. All posts tagged #227 from any topic appear here.