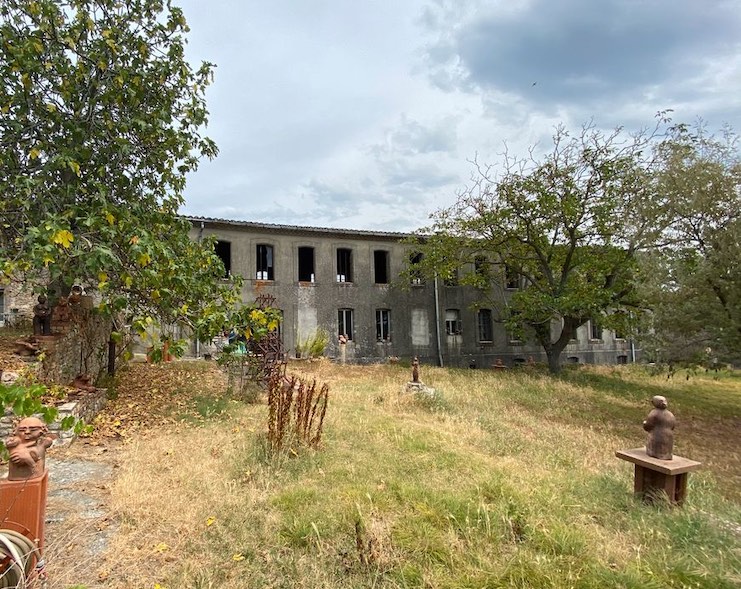 Notes ✧ compare with #149 which is an easy acquisition, trading little outdoor space for much better trails
✦ doesn't appear to have sold, but the owner has removed and may have simply rented to an artist
✦ the village has a history of mills (flour and wool), and there's a huge but more recent empty one just below which hosts a circus festival and regular art exhibitions; someone runs living food courses; there is actually a very very basic community-run shop/bar another village about 15mins drive hosts a museum of book arts and crafts plus an old factory now with many artist's studios, also a good cafe and restaurant
✦ a larger village just about reasonable biking distance has a bakery, minimarket, pizzeira (and dance school)
✦ there's three good towns Carcassone (with its medival fort), Castelnaudry and Revel, 20–30mins drive or an easy and pleasant bike along the canal du midi for a half-day out; Mirepoix is 40mins
✦ this location thus despite being quite tame and rather lacking notable countryside is still rural and very much accessible, balancing pastoral wooded hills for walks (climbing to 650m), a good variety of surrounding ruins, villages, and towns, against an inward-work focus with potential for workshops and events using the factory — arguably a better setting for longer city escapes rather than for adventures
✦ given the slightly distant services, in addition to a minibus, at least one Citroen Ami would be useful (a 2-seat electric car that doesn't require a licence so good for anyone to pop about in) probably with first hour free to pop and get croissants, then a small contribution; could also be available to the village
✦ there's a resevoir for swimming 15 mins walk, no activities other than hiking, biking and horse riding wthout going farther afield
✦ good 1200m2 garden with a couple of trees sitting mostly above the village and looking out over rooftops; large enough to host a marquee for events
✦ the garden frontage is oriented south-west and could thus have a winter conservatory, whilst opening directly onto it in summer; the street frontage is open over some trees and the little valley; the facade with its buttresses would be a great canvas for streetart and making the building uniquely recognisable
✦ easy access year-round to the local Carcassonne airport with Ryanair from Portugal, the UK, Belgium and Netherlands, or night train from Paris; plus Toulouse, Beziers, Montpellier and Perpignan airports by train
✦ would operate on a 4–4–4 season; the long somewhat dreary and chilly winter could be nicely offset with the big windows, garden view and some big fireplaces for anyone focussing on a project
✦ roof, floors and structure in good condition; interior could just leave walls as they are, even floors, similarly for roof though insulation ultimately required for winter use
✦ 42 large windows required but some are okay during works, still less than similar properties and all same spec; each floor has 15 windows along its length, some would be blocked
✦ two 275m2 floors 8m50 deep, 32m long, plus a 120m2 cave with some small windows below garden
✦ almost all rooms would have good outlooks, some with 2 large windows, onto garden and surroundings or valley; many could have mezzanines shares for one month ~€2700 standard (ensuite), €1800 pod; dedicated microstudio ~€26k
✦ ~14 units, 6 ensuite, 5 basic, 4 microstudios (13–19m2 +ensuite +mezzanine), 1 dorm with 8 pods; possible a few more might be sqezzed in as 13m2+mezz is quite generous diverse common spaces: small casual coworking, small focus workspace/snug, kitchen/dining, plus cinema/auditorium/library and overflow workspace in cave; could be opened to village and locals if operated with public use
✦ fibre is underway to be available in a year or so, already 4km away, doesn't have an exchange so only bad ADSL; nearest mobile/4G antenna is 2km unobstructed; fixed LTE is also being rolled out but about 7km away
✦ future upgrades could include a swimming pool; ideally an extension would be built seperating the small adjoining property, and providing a larger casual coworking directly in the garden whilst freeing the entrance to become a bigger more participatory cafe-style kitchen-dining space
✦ owner also has the adjoining building with 230m2 of land which is too expensive to be useful but might be good to build an extra wing
✦ requires sewer connection but right outside, and internal plumbing is no issue with the wooden floors
•• Show property notes ••

Nobody's tagged this yet. All posts tagged #137 from any topic appear here.